Where do the City’s greenhouse gas emissions come from and where are we headed?

Think about your energy choices today. Did you crank the thermostat a few degrees to combat the morning chills? How did you get to work? Did you face the I-95 rush hour grind? When you left your home, did you leave your phone charger plugged in, leeching energy through a phantom charge?

All of these actions require various amounts of energy, but our current energy system is killing the planet and harming our health. By extracting and burning oil and coal for our everyday energy needs and pumping climate pollution like carbon dioxide into the atmosphere, we have managed to push the planet to the brink of mass-extinction. But there’s good news – we have 11 years to curb climate change by making a global shift towards clean, renewable, responsible and affordable energy.

Where does Providence’s climate pollution come from?

Climate pollution in Providence starts with energy: how we heat and cool our homes and buildings, how we travel around the city and how we fuel the energy system we depend on.

Approximately 70% of the city’s climate pollution – also known as greenhouse gas emissions – comes from how we use energy in our buildings. Like most cities in the Northeastern US, Providence depends primarily on burning what are essentially millions of years’ worth of naturally-decayed organic matter – commonly known as natural gas – to produce electricity and heat for our buildings. Extracting natural gas from the land is environmentally destructive, is extremely harmful to local communities and burning it generates climate pollution. Fracking – a common process that involves drilling deep into the ground and using thousands of gallons of water to push gas and other elements to the surface – can cause inadvertent effects like contaminated drinking water, earthquakes, and explosions (just to name a few).

The remaining 30% of Providence’s climate pollution comes from transportation – the thousands of cars, trucks, buses, trains and ships that travel throughout the city and its port every day. The vast majority of transportation-related emissions come from burning gasoline and diesel in combustion engines which is why considering electric vehicles is so important.

Beyond energy use in buildings and transportation, less than 1% of the city’s emissions come from waste, wastewater, and fugitive emissions like gas leaks and emissions lost to broken or inefficient infrastructure.

In 2016 Mayor Elorza committed to putting  Providence on a track towards becoming a carbon-neutral city by 2050. According to data compiled by the Acadia Center, if we were to take no climate action whatsoever, greenhouse gas emissions would only decline 7% by 2050–from 1.7 million metric tons of carbon dioxide equivalent (CO2e) emitted per year  to 1.58 million metric tons in 2050. (see Figure 1). To put it in perspective, 1.7 million metric tons of CO2e is the same amount of GHGs that come from driving an average passenger car for 4.1 billion miles or a distance equivalent to circling the earth over 160,000 times! This scenario takes into account existing policies, such as the state’s Renewable Energy Standard and the federal fuel economy standards for cars, which the federal government is currently working towards rolling back, and assumes no policy changes.

So how do we get to carbon neutrality by 2050? We will start by planning  a realistic path that addresses the core of our buildings and transportation pollution and  in a way that is truly equitable and transformative by centering those in the decision-making process who have been most impacted historically and are most at risk for future impacts. 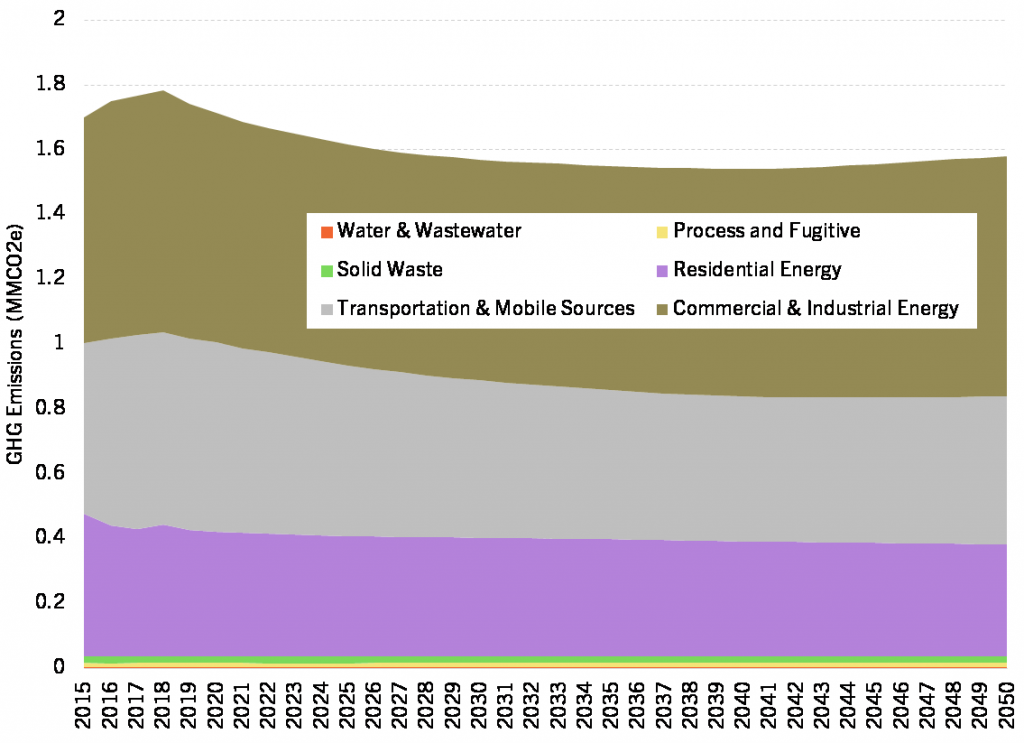 As the City develops its climate justice strategy, we’re exploring our energy system with Providence’s frontline communities and brainstorming policies and programs that not only cut climate pollution, but that also makes Providence a model for equitable and resilient transformation.

The City has already taken the first steps to meet our 2050 goal. The RePowerPVD program that launched in March 2018 is helping large buildings manage and reduce their energy use. Large-scale local renewable energy projects like the recent solar developments in Johnston and Cranston will help wean the City off its reliance on climate-polluting energies. Affordable transportation options like the JUMP bike share program and electric scooters make it easier to leave the car at home and the introduction of electric buses into the RIPTA fleet is essential to curbing pollution from Providence’s public transportation system.

Other policies under consideration are community-based renewable energy systems, smart microgrids that are especially effective in incidences of extreme weather, anti-displacement policies (which are critical to prevent “Green Gentrificiation”) and so many more among a menu of rapidly-evolving carbon reduction mechanisms.

No single policy or initiative will get us to carbon neutrality by 2050, and as recent climate reports emphasize over and over again, no amount of strategizing will protect us from the devastating effects of climate change without placing equity at the core of climate action. Our climate justice plan needs to support – and be centered around – frontline communities as they play a leading role in the transformation.

Next time: Infusing equity throughout Providence’s climate justice strategy
Coming up: Looking at the energy we use in providence and ways to make it better
Previously: Climate change & cities – why it’s more important than ever for cities to take aggressive climate action

We’re listening! We want to hear from you. How can we improve Providence’s energy system to make it more equitable, sustainable, and resilient? Email us at or connect with us on Facebook or Twitter.