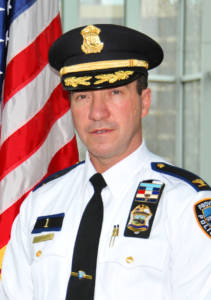 Hugh T. Clements Jr. was appointed to the Providence Police Department on May 5, 1985 as a night Patrol Officer in the Uniform Division. He then went on to serve on the Neighborhood Response Team Uniformed Task Force before being transferred to the Special Investigations Bureau, the department’s vice and drug unit. In 1990, Clements was promoted to Detectives where he worked in the night squad. In 1992, Detective Clements was promoted to the rank of Sergeant where he spent three years as a night Sergeant in Sub-District 1, South Providence. Sergeant Clements was then transferred to the Detective Bureau where he served as the Squad 2 Sergeant and spent the next seven years supervising the investigations of all major crimes including murder, robbery, burglary, firearms offenses and gang activity. In a squad that carried an extremely heavy caseload, he played an active role in several major investigations during this time.

In 2002, Hugh was promoted to the rank of Lieutenant and transferred to the midnight shift of the Patrol Bureau. Lieutenant Clements was later assigned as District 5 Commander covering the neighborhoods of Olneyville, Hartford, and Silver Lake. Consistent with the department philosophy at this time, the true community police model was practiced with several creative and innovative initiatives carried out in this particular district. He was transferred back to the Detective Bureau, and in December 2005, he was promoted to Captain where he was responsible for all major crimes operations in the Investigative Division.

In 2008, when promoted to Major he was assigned for one year as the Commander of the Homeland Security Division, before being reassigned as the Commanding Officer of the Uniform Division. He later served as Deputy Chief and was appointed as Acting Chief of Police in July 2011, and on January 6, 2012, he was appointed as the 37th Chief of the Department and promoted to the rank of Colonel.

Chief Clements received a Bachelor of Arts Degree in Sociology from the University of Rhode Island and a Bachelor of Science Degree in the Administration of Justice from Roger Williams University. He holds a Master of Science Degree in Criminal Justice from Boston University. He attended many specialty schools throughout his career such as: The New York State Police Williams Homicide School, The Illinois State Police Supervisor’s School, ATF National Gang School in California, and in 2005 he graduated from the Leadership RI Alpha11 Class and the Senior Management Institute for Police put on by the Harvard Kennedy School at Boston University.

Chief Clements is the recipient of numerous commendations for excellent police work and devotion to duty, including being recognized with the Chiefs Award 3 times. He has also received recognition from several outside agencies to include: The FBI, the Attorney General’s Office, ATF, as well as other police agencies. Additionally, he also received several awards for his participation in a RICO Latin King Investigation.

Chief Clements and his wife Donna of twenty-six years, have 2 daughters Kayleigh and Kourtney. 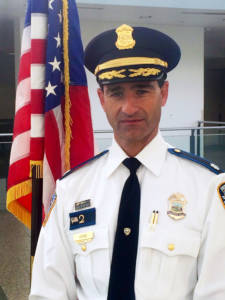 Deputy Chief Thomas A. Verdi is a 30 year veteran of the Providence Police Department, the largest police department in Rhode Island and second largest in New England.  Prior to his appointment as Deputy Chief,  he served as the Commanding Officer of the Uniform Division and as the Executive Officer of the Administrative Division.  Deputy Chief Verdi has comprehensive experience related to investigations, organized crime, the patrol bureau, and SWAT operations.  Deputy Chief Verdi had built and maintained a strong working relationship with local, state and federal agencies as well as the community.   In 2006 Verdi was the recipient of the National Association of Police Organizations “TOP COPS” Award, amongst numerous other awards and commendations throughout his career.  Verdi also serves on several boards and commissions representing the Providence Police Department.  In addition, Deputy Chief Verdi has represented Rhode Island law enforcement on the Rhode Island Parole Board from 2006 – 2016 and was the first Providence Police Officer to be appointed to serve on the Parole Board.  In 2014 Deputy Chief Verdi was inducted into the Rhode Island Heritage Hall of Fame.  Separate from his various accomplishments in law enforcement, Verdi also serves as an Amateur Scout for the Major League’s Baseball organization, The Cincinnati Reds.