The men and women of the Providence Police Department are some of the most compassionate and philanthropic individuals who often go beyond the call of duty to help others in need. Some of the causes officers have been involved with include raising funds for cancer research, autism, veterans, and fallen officers.

While these initiatives occur throughout the year on an annual basis, there are other acts of kindness officer display that really highlight that they are “Cops with Hearts”.

This Month's Cops with Hearts Highlight 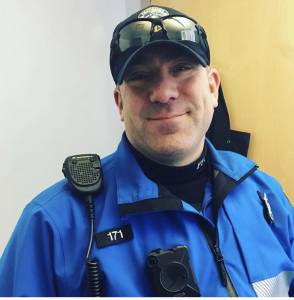 Patrol Officer Matt Goddard, assigned to the Bike Unit in District 1 (Downtown), is a shining example of how community policing affects a neighborhood and how the results can literally transform lives.

Officer Goddard had the unpleasant task of having to inform a homeless man sleeping downtown, that he had to relocate. As the weeks passed, Officer Goddard had several more interactions with this individual and became aware of the man’s situation. Charlie, originally from South Carolina, had come to Rhode Island a year and a half ago for a fishing job. After being hurt, he became addicted to alcohol and opioids, homeless, and lost touch with his family.

During one of their conversations, Officer Goddard asked Charlie if he would like to go back home. When Charlie replied yes, Officer Goddard sprang into action and reached out to one of our community partners-Crossroads RI. Together they worked to reconnect Charlie with his family and ultimately provide him the resources to travel back to South Carolina.

However, Officer Goddard did not stop there! Because Charlie was scheduled to leave Providence to head back home while he was on vacation, Officer Goddard was worried that Charlie would not make it back home, so he personally reached out to Charlie’s family. Charlie’s mom and dad were so happy to report that after a year and a half, Charlie was finally home safe!