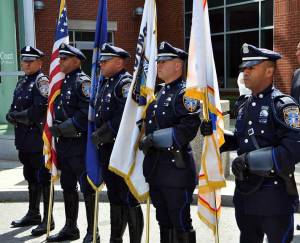 The Providence Police Honor Guard, originally called the Color Guard, was founded in 1946. This unit was organized to represent the Providence Police Department and was comprised of a group of World War II veterans. The purpose of this unit was and still is to represent the Police Department veterans at various functions and parades.

In the late 1980s, Captain John Glancy, after a trip to Washington D.C., was inspired by other departments who had adopted a more formal dress code. When Captain Glancy returned from Washington D.C., he changed the uniform to what is presently worn by our officers today. The uniform currently worn is a dress blue blouse, boots, breeches, and two types of ceremonial lanyards. One lanyard is used for parades and ceremonies, while the second lanyard is used for funerals and memorials. The twelve-member Color Guard, with its new look, also changed its title from the Color Guard to the Honor Guard.

Originally, the unit’s main function was to march in parades. This would change on Thursday, February 3, 1994, the day Sergeant Steven Shaw was killed in the Line of Duty. The Honor Guard went from doing mostly ceremonial events to now laying a brother officer to rest.

The Honor Guard also participates in somber occasions, such as funerals and memorials, to celebrations such as promotional ceremonies, swearing-in ceremonies, and community events. The Honor Guard recently traveled to Washington D.C. upon the invitation by the National Law Enforcement Officers Memorial for Sergeant Maxwell Robert Dorley’s name inclusion to the memorial in Washington D.C. His name was formally dedicated on May 13, 2013, at the 25th Annual Candlelight Vigil during National Police Week. The Honor Guard participated in VIP/ Surviving Family Escorts, Honor Cord around Reflecting Pool, Wreath Vigil, and State flag bearer during Standing Watch for the Fallen Ceremony, Ceremonial Stage Backdrop during the Candlelight Vigil, and Memorial Services at the U.S. Capitol.

Anyone who would like to support the Honor Guard with a donation can do so by contacting the Chief’s Office or making payable to City of Providence, Honor Guard, 325 Washington St Providence RI 02903.

Donations are used to update Flags, flag poles, holders, and other uniform needs of the unit. Donations may be tax-deductible. Requests for Honor Guard participation should be directed to the Chief’s Office for approval. Priority goes to any Police-Related events/ceremonies and/or memorials.

Events we have participated through the years: 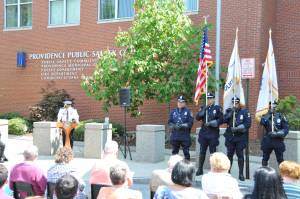 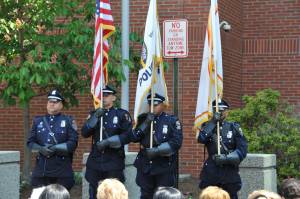