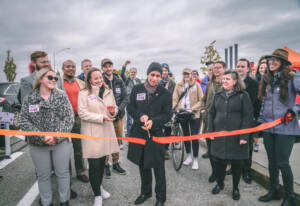 Mayor Jorge O. Elorza, Providence Streets Coalition, AARP of Rhode Island, South Water Street’s Wild Colonial Tavern, and the City of Providence’s Planning Department today held a ribbon cutting celebration for several projects included in the Providence Great Streets Initiative, which aims to reshape city streets by prioritizing safety, sustainability and transportation choice. Since 2017, more than 33 lane-miles of the Urban Trail Network have been completed or improved citywide, including those currently under construction, with many additional miles of traffic calming on neighborhood streets across the City’s 15 wards.

“In order to make our streets safe, healthy, and vibrant, we have to be willing to respond to the needs of our entire community, be innovative, and welcome change,” said Mayor Jorge O. Elorza. “The completed Providence Great Streets Initiative projects, like the South Water Street urban trail and similar projects across all of our neighborhoods, are strengthening our sense of community and making our City safe and accessible for all.”

October is National Pedestrian Safety Month and according to the National Highway Traffic Safety Administration, 6,205 pedestrians in the U.S. died from traffic-related incidents in 2019, with one pedestrian losing their life every 85 minutes. The NHTSA contends that no matter someone’s preferred method of transportation, everyone is a pedestrian at some point or another, and safety interventions are required to protect lives.

Moreover, street safety interventions are overwhelmingly popular among Providence residents. According to a recent EMC Research poll of registered voters in Providence commissioned by PeopleForBikes, 84% support the Providence Great Streets Initiative while 80% believe that developing alternatives to driving is the best way to reduce the City’s traffic issues. Additionally, the poll found that nearly 75% of people who ride bicycles in Providence are concerned about being hit by a motor vehicle and 71% would ride more in Providence if there were protective barriers, such as separated bicycle lanes, separating bikes from cars.

“With the completion of the Michael S. Van Leesten Memorial Bridge and surrounding parkland in 2019, more people than ever began visiting our riverfront,” said Liza Burkin, Organizer at Providence Streets Coalition. “And yet they still faced a significant risk of traffic violence from the two-lane, one-way configuration of South Water Street that sent drivers speeding, drag racing, and leaving the city as fast as they could. Now, the South Water Street trail allows all travelers to safely access the parks, river, businesses, and the homes to come in this neighborhood. It’s not a highway anymore – it’s a destination.” 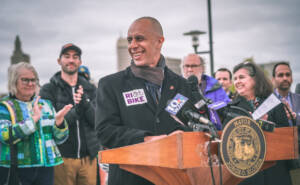 The City is already seeing dramatic and tangible safety improvements resulting from Great Streets projects. According to a study done mid-October by McMahon Associates on behalf of the City, and based on speeds counted prior to installation of the South Water Street project versus after its completion, the project has resulted in a 27% reduction in speed, an 84%-96% reduction in the percentage of vehicles traveling faster than 30 mph, and a 17 mph reduction in maximum speed.

“The South Water Street urban trail and other Great Streets projects will attract sustainable interest in our City, providing a myriad of benefits for our neighborhoods,” said Councilman John Goncalves, Ward 1. “Street safety combined with transit options and environmentally friendly road infrastructure will improve quality of life for our residents and visitors, alike.”

Beyond South Water Street, Great Streets projects can be found citywide in all of Providence’s neighborhoods. After years of planning and public engagement, Broad Street will see new construction beginning this fall.

“Road safety improvements have been underway for years now, and I am especially grateful for both completed and future upgrades on Broad Street,” said Councilman Pedro Espinal, Ward 10. “I am proud to have collaborated with the Planning Department on common sense changes to our city streets which allow for all different kinds of transportation to take place safely and harmoniously.”

“Accessibility isn’t just a goal- it’s a necessity,” said Councilwoman Rachel Miller, Ward 13. “As we move to make our streets safer and more accessible for everyone who uses them, from the pedestrian and those who use wheelchairs, to bikers, bus riders, and drivers, we are advancing equity and quality of life issues for our residents.”

The City’s Great Streets projects also prioritize access and equity for older adults and those with disabilities, providing safer infrastructure for use of all kinds of mobility assistance devices.

“It’s exciting to see Providence taking such important strides toward making the city’s streets safe and accessible for people of all ages and abilities, and 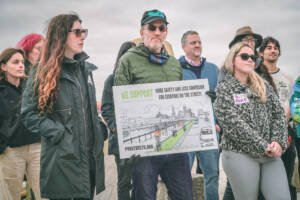 for users of every mode of transportation – including wheelchairs, motorized scooters and other mobility devices,” said Catherine Taylor, State Director of AARP Rhode Island. “The City of Providence’s Great Streets initiative is creating truly livable streets that invite and include and safeguard everyone, giving residents who are older or who have disabilities the opportunity to age in place and participate fully in their communities.  I am so proud of Providence’s deep commitment to livability as a member of the AARP Network of Age-Friendly States and Communities.”

The City prioritizes public engagement with community context for all projects affecting its 15 wards, which allows the City’s Planning Department to adjust plans according to feedback. Over the past two years and as recently as June of this year, the City has sent more than 1,800 direct mailings to adjacent property owners, businesses, and residents, and has hosted and attended more than 20 in-person and virtual public meetings with hundreds of participants. The City continues to coordinate closely with residents and businesses to share updated construction timeline information as it becomes available.

And lifelong residents and business owners are taking notice.

“The South Water Street improvements will keep our neighbors and visitors safe, slowing the pace of cars, and bringing customers to our businesses who would like to stay awhile, all while encouraging a healthy and environmentally-friendly use of our neighborhood,” said Maurice Collins, owner of Wild Colonial Tavern on South Water Street. “The new urban trail is a positive signal to people considering Providence as the place to live their lives, invest their time and treasure, spend their young adulthood, and raise their families.  It shows that Providence can be a forward-thinking community, willing to improve itself, willing to undergo change to care for itself and its people.”

For more information about Great Streets in Providence, please visit the City’s website.