PROVIDENCE R.I.- Mayor Jorge O. Elorza and Director of Sustainability Leah Bamberger today announced the release of the City of Providence’s first annual RePowerPVD report that highlights the successes of a voluntary energy reduction program for large buildings throughout the capital city. Energy used in buildings is one of the leading sources of climate pollution locally, accounting for roughly 70 percent of the city’s carbon footprint. The RePowerPVD program challenges large buildings throughout Providence to reduce their energy usage by 20 percent compared to a baseline taken in 2015.

“The threat of climate change is so great that we can no longer wait for Washington to lead the way,” said Mayor Jorge O. Elorza. “That’s why Providence is taking the initiative to reduce its climate footprint as part of our goal to become a carbon neutral city by 2050. I thank the participants for their commitment to a greener and more sustainable Providence.” 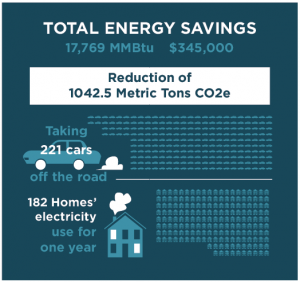 The RePowerPVD report, prepared by City’s Office of Sustainability, identifies $345,000 in total energy cost savings, a total energy use reduction of 17,769 MMBtu and a greenhouse gas reduction of 1042.5 Metric Tons CO2e realized by participating properties. The total measured energy reduction of participating buildings is equivalent to removing 221 cars from the road for one year or the annual average electricity use for 182 households.

The report identifies Mary E. Fogarty Elementary School in the South Providence neighborhood as the first-ever participating building to have reduced its energy usage by more than 20 percent by 2025 as compared to a baseline taken in 2015. The school achieved a 26 percent energy use reduction this year as compared to its 2015 baseline.

Mayor Elorza launched the RePowerPVD buildings energy challenge in 2018, which has since enrolled over 1,737,156 Gross Square Feet of Providence building space. In addition to highlighting the progress made during the first year of the program, the report also features three new projects that are enrolled in the RePowerPVD “Race to Zero” competition, where properties compete to become the first Zero Energy Building (ZEB) in Providence. Participants include Truth Box, Inc., Sheridan Small Homes by ONE Neighborhood Builders, and the Roger Williams Park Zoo Education Center.

“By committing to energy conservation, these RePowerPVD property owners are saving money and protecting the planet and future generations,” said Leah Bamberger, Director of Sustainability. “Retrofitting Providence’s existing buildings to be more energy efficient is critical to creating a healthier, cleaner Providence for current and future generations to enjoy.”

The RePowerPVD report complements the Municipal Energy Report for Fiscal Year 2018, which showcases multiple improvements in energy use within City-owned facilities. Some notable achievements include: