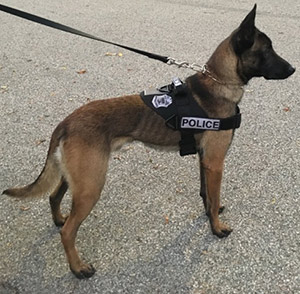 Providence, RI- Public Safety Commissioner Steven M. Paré and Colonel Hugh T. Clements, Jr. announced a new addition to the Providence Police Department’s Homeland Security Bureau, K-9 EDOX (explosive-detection-odor-expert,) a 16-month-old Belgian Malinois. K-9 EDOX has been assigned to work with Officer Scott Keenan, who is a 16 year veteran of the force, and the team has been training together since August of 2017. He and Officer Keenan received an intensive training course through the Rhode Island K-9 Academy led by Master Trainer Sergeant Roger Reardon, who formerly served as a K-9 handler and trainer for the Rhode Island State Police for 25 years. K-9 EDOX was certified as an Explosive Detection K-9 on September 11, 2017. K-9 EDOX and Officer Keenan will serve as an additional resource for the PPD to engage within the community and at events, while also providing enhanced public safety measures throughout the City and state and assisting other surrounding law enforcement agencies. 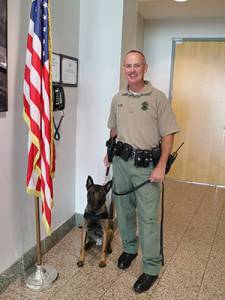 K-9 EDOX and Officer Keenan join the other members of the PPD K-9 Unit, K-9 GERO and Officer Louis Salinaro, K-9 RIPP and Officer Eric Chabot, and K-9 JIMBO and Officer Danny Sirignano, who all serve within the Patrol Bureau and are specially trained in patrol techniques and narcotics.

“The Providence Police take great pride in our highly trained K-9’s who are invaluable when it comes to ensuring the safety of our citizens to the best of our ability,” said Colonel Clements. “Our previous Explosive Detection K-9’s have worked conducting sweeps at various concerts, parades, air shows, and sporting events as well as at high-profile events including presidential visits, the Boston Marathon, and for a NASA shuttle launch. We welcome K-9 EDOX to join our great department and thank him and Officer Keenan for their dedication and hard work through the training process.”