“Our City and our nation would not be where it is today without the commitment and sacrifices of Reverend Dr. Martin Luther King, Jr. and generations of Americans committed to promoting equality, acceptance and justice,” Mayor Elorza said. “Kobi Dennis, Eugenia Marks and Barbara Thurman exemplify Dr. King’s legacy and continue to advance his vision through their efforts in our community.”

The MLK Hall of Fame recognizes individuals who carry on the legacy of the late Reverend Dr. Martin Luther King Jr. within the community. Inductees have made substantial contributions to acceptance, social justice, civil rights and equality in the City of Providence.

“It’s a pleasure to join Mayor Elorza in honoring three individuals who have given so much to improve life here in Providence,” said Council President Luis Aponte. “Dr. King once said, ‘The moral arc of the universe is long, but it bends toward justice.’ Today, we celebrate three people who have dedicated themselves to shortening that arc and making its bend toward justice sharper. I want to thank Kobi Dennis, Eugenia Marks, and Barbara Thurman for helping to make Dr. King’s dream a reality.” 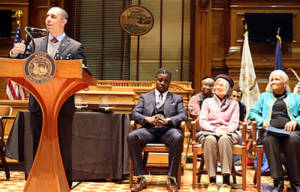 Kobi Dennis is the founder of Project Night Vision, a partnership between the City of Providence and Providence College aimed at providing at-risk teenage youth with a safe and active learning environment through athletics, team building and community service.

Eugenia Marks is the Senior Director of Policy for the Audubon Society of Rhode Island, an organization which protects over 9,500 acres of woodlands and costal properties in Rhode Island through education, land conservation and advocacy.

Barbara Thurman is a long-time resident of Wiggins Village whose history of activism extends back to the 1960s and includes work supporting affordable housing and tenants’ rights in the City of Providence and the State of Rhode Island.