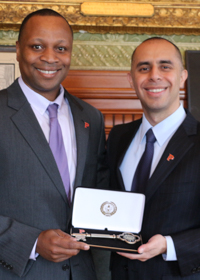 Mayor Jorge O. Elorza today presented a key to the City to Deputy Director of Recreation Michael Stephens following his illustrious selection as an official in the NCAA Men’s Basketball Division I championship game, which took place on Monday, April 6.

“Michael Stephens is a great example of what can be accomplished when you follow your dreams and stay connected to your community,” said Mayor Elorza. “In addition to being one of the most respected NCAA referees in the nation, Mike has been a great ambassador for the Recreation Department and a leader in the Providence community. It is my pleasure to present him with a Key to the City.”

Stephens was joined by friends, family and colleagues at a ceremony held in City Hall this afternoon.

“I thank Mayor Elorza for this honor and I thank everyone who has believed in me and mentored me throughout my career,” said Stephens. “Without your support I would not be where I am today.”

Stephens is the Deputy Director of Recreation for the City of Providence and has been an NCAA referee since 1997. He has officiated Final Four games on four occasions before this year’s selection to officiate the championship game.