PVDFest Returns For Year Three With Off The Wall Programming June 1-4, 2017 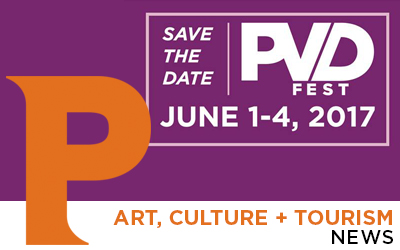 Providence, RI – City of Providence Mayor Jorge O. Elorza, the Department of Art, Culture + Tourism and Founding Partner FirstWorks have announced that PVDFest, Providence’s signature art festival, will return for its third edition June 1-4, 2017. During the four-day event artists and performers from around the globe and just around the corner will descend upon Providence for a multicultural and multidimensional celebration of artistic expression.

“PVDFest has become the signature celebration of creativity in Providence over the past few years,” said Jorge Elorza. “As the festival grows, so does the list of incredible partners working to make this happen. This year’s addition of the Maker Faire will engage new audiences and connect festival goers to new experiences. I am proud to welcome guests and visiting artists to the Creative Capital and introduce them to the doers, thinkers and makers here in our city.”

The four days of arts activities will once again culminate in a large-scale celebration of creative expression on Saturday, June 3, with diverse programming focused on Providence’s ever-evolving culture taking place throughout the week. PVDFest will turn the city into a stage, from the festival core, anchored by City Hall on Kennedy Plaza, then spreading through the streets of downtown with interactive installations and into the West End neighborhood for Sunday events.

“The vision for PVDFest is one of creative combustion between the extraordinary artists of Providence and internationally recognized creators,” said Kathleen Pletcher, Executive Artistic Director of FirstWorks.” As Founding Partner for the Festival, FirstWorks will curate spectacle, music, and dance performances that will light up the FirstWorks Plaza Stage, spotlighting international stars and local favorites that will have festival-goers dancing in the streets and discovering global culture from the world’s stage.

“FirstWorks is thrilled to be the catalyst for world premieres and spectacular mash-ups–bringing together aerial dance with spoken word and classical music with pop-up parades–as the face of a skyscraper becomes a dance floor, and the iconic Cranston Street Armory, a backdrop for art. Visitors and audiences can wander through an urban landscape transformed with art and music that reflects the diversity of our city and America,” said Pletcher.

Using the façade of a downtown building as a dance floor, the international vertical dance pioneers, BANDALOOP will fly, float, and turn dreamy cartwheels and backflips in midair across the Providence city skyline as they headline this year’s festival with #PVDPublicCanvas, a spectacular lighted performance taking place on the evenings of Friday, June 2 and Saturday, June 3. The city streets below will be turned into a world-class performance stage, cutting edge art gallery, and a culturally diverse block party.

As momentum builds for PVDFest’s third year, the schedule has expanded and community engagement deepened to include innovation-focused events. Enhanced Friday, June 2 programming will include a public tour of the Woonasquatucket River Corridor, an opportunity to learn more about Providence’s emerging innovation district and visionary developments happening in the area. Friday programming will also feature a Moon Market collaborative retail party featuring over 30 Rhode Island based movers, shakers, and makers.

For the first time in the history of PVDFest, Saturday programming will include a Maker Faire. Presented in collaboration with AS220 and Providence’s Department of Art, Culture + Tourism, the Maker Faire will attract engineers, artists, scientists and crafters, and will encourage demonstrations, experiments, and knowledge exchange in a family-friendly showcase of invention, creativity, and resourcefulness.

In addition to Providence’s eclectic food truck scene and delicious downtown restaurants within the footprint, on Saturday, June 3 the Providence Cultural Equity Initiative (PCEI) will host a Global Food Village. Nearby, the producers of the Ocean State Oyster Festival will host a PVDFest one-off version of their event. The true magic of the festival is a public procession through the heart of Downtown. Community groups, cultural organizations, artists, performers, dancers, neighbors and all are invited to showcase their PVD spirit with music, dance, floats, and carnival flair.

On Sunday, June 4, the PVDFest finale will bring together art installations and music on the Dexter Street Training Grounds, one of the city’s most frequented parks. Finale programming will celebrate the adjacent historic Cranston Street Armory, and the surrounding neighborhood, with a day filled with music and art. The finale is part of the Cranston Street Armory Animated by Art, a multi-month project conceived by Providence’s Department of Art, Culture + Tourism and FirstWorks along with numerous cultural and civic partners. Highlights of the celebration include “En Masse” a special FirstWorks musical project by PVDFest veteran Daniel Bernard Roumain (DBR), engaging hundreds of local musicians in a hybrid between a pop-up performance and a deconstructed parade; Community MusicWorks’ 20th Anniversary celebration concert featuring salsa artist Gonzalo Grau; and mobile art installations curated by the RISD Museum Artist Circle. This event is funded in part by an Our Town grant from the National Endowment for the Arts.

PVDFest is made possible in large part by the generous sponsors who continue to support Providence’s creative culture year-long, including community partners the Providence Tourism Council, Waste Management and ALEX AND ANI.

A combination of hyper-local and global performers, artists, businesses, and cultural organizations will collaborate programming during the four day event. Today’s announcement includes:

About FirstWorks – FESTIVAL FOUNDING PARTNER
FirstWorks is a non-profit based in Providence, Rhode Island dedicated to building the vitality of its community through world-class performing arts and education programs. Founded in 2004 as a reincarnation of First Night festival, it is the only First Night in the U.S. to successfully transform into a year-round arts organization. Central to its mission is a powerful, accessible, and equitable arts-integrated learning program benefiting over 4,000 low-income students. The FirstWorks engagement model has connected Rhode Island audiences with world-premieres developed in Providence from artistic icons such as Yo-Yo Ma, Urban Bush Women, and Paul Taylor Dance Company. FirstWorks is honored to have a continuing partnership with the City of Providence working as a catalyst for the arts in the Creative Capital. Beginning with the FirstWorks Festival on the Plaza in 2012, initiatives in partnership with Providence’s Department of Art, Culture, and Tourism have been awarded three prestigious “Our Town” grants from the National Endowment for the Arts. MORE INFO

About AS220-FESTIVAL CURATOR
AS220 is an artist-run organization committed to providing an unjuried and uncensored forum for the arts. AS220 offers artists opportunities to live, work, exhibit and/or perform in its facilities, which include several rotating gallery spaces, a performance stage, a black-box theater, a print shop, a darkroom and media arts lab, a fabrication and electronics lab, a dance studio, a youth program focusing on youth under state care and in the juvenile detention facilities, four dozen affordable live/work studios for artists, and a bar and restaurant. AS220’s facilities and services are available to any artist who needs a place to exhibit, perform, or create original work and its classes and public-access studios are among the most affordable in the nation. AS220 was founded on the principle that freedom of expression is crucial for the development of strong communities and individual spirits. Each year, AS220 serves over 1,000 artists and is destination for upwards of 93,000 people. MORE INFO

About The Dean Hotel – FESTIVAL CURATOR
Built around the history and culture of Providence, The Dean is a hotel that values collaboration with our neighbors. Filled with custom furniture, craftwork from local purveyors, and found objects from Europe and beyond, The Dean revels in the details. This historical building has been elegantly transformed into a 52-room hotel in the heart of Providence’s Downcity district. A place of history, culture, education, arts and design, Providence is a town with a rich and interesting past — and future. Explore the universities, cultural institutions, events, shops, restaurants and galleries that make Providence one of the most hidden, yet intriguing urban destinations in the USA. MORE INFO

About The Downtown Providence Parks Conservancy – FESTIVAL CURATOR
The Downtown Providence Parks Conservancy (DPPC), a program of the Providence Foundation, is a public-private partnership formed in 2008 to preserve and revitalize Providence’s historic downtown core by transforming it into a lively, cohesive, and prosperous economic and cultural center through the development and management of exceptional public spaces. As part of its mission, DPPC manages and creates free public arts, cultural, educational, and recreational programs to engage and build a diverse downtown community within the parks. The DPPC vision includes the creation of a pedestrian-friendly environment, improving the RIPTA ridership experience, bolstering economic well-being, encouraging tourism, and promoting arts and culture. Public programming in Greater Kennedy Plaza transforms the public spaces with concerts, festivals, and family programing. MORE INFO

About Maker Faire
Maker Faire is the Greatest Show (and Tell) on Earth–a family-friendly showcase of invention, creativity and resourcefulness, and a celebration of the Maker Movement. It’s a place where people show what they are making, and share what they are learning. Makers range from tech enthusiasts to crafters to homesteaders to scientists to garage tinkerers. They are of all ages and backgrounds. MORE INFO