Blog: Champions of the Curb – Sorting Out Recycling in PVD

In honor of National Recycling Day, we’ve focused our first post on diving into Providence’s very real recycling challenges. Learn about the people who work tirelessly to keep plastic out of our landfill and why recycling right is more important than ever before.

Champions of the Curb

It’s 5:30am in Providence and Environmental Inspector Dalila Ramirez is elbow deep in someone’s curbside recycling bin. Why? She’s trying to determine if anything in the blue-topped container is, in fact, recyclable.

“People put all kinds of trash in their recycling carts,” says Ramirez as she sifts through greasy takeout containers, bits of a broken window blind, rotting food, and the number one culprit of contamination: plastic bags. “Maybe they think it all gets sorted when it leaves the curb?” She closes the lid and wraps a red tag around the handle, signaling a contaminated recycling load. “Maybe they just don’t care.”

Ramirez, along with six other Environmental Inspectors and a handful of folks from the City’s Department of Public Works, walk Providence’s residential streets in the early morning darkness every week. Their mission is two-fold: tag recycling carts that contain trash and other non-recyclables and educate residents as to why their recycling wasn’t picked up that week. If a household’s recycling cart has trash in it, the inspectors leave behind an informational warning; if a household fails to correct their recycling practices, they are left a warning each week until eventually, inspectors issue a ticket and their trash and recycling won’t be collected until the next collection day.

“You can tell when someone is trying,” says Ramirez. “People see that something has plastic in it and assume the whole thing is recyclable. Or they think things are still accepted which aren’t anymore, like shredded paper. Others just want to get the trash out of their house and use [the recycling cart] as a second garbage can.”

The most common problem on these regular inspection routes? Plastic bags. Despite the fact that plastic bags are not accepted in your curbside cart as they are actually dangerous for Rhode Island’s recycling facility,  Ramirez and her team find scrunched up single-use plastic bags and/or trash bags that actually contain good recyclable materials under the lid of almost every recycling cart 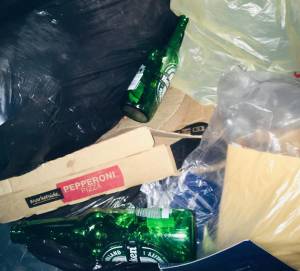 In FY 2018, 10,391 tons of contaminated recycling was rejected from the Rhode Island Resource Recovery Corporation (RIRRC), costing the City of Providence approximately $715,697. Addressing contaminated recycling at the curb is key to preventing plastic and other recyclable materials from ending up in Rhode Island’s landfill and avoiding the associated tipping fees. While a small amount of contamination is acceptable, a load that contains a hefty amount of trash is likely to get rejected and sent to the landfill. Now, more than ever, landfills are becoming overburdened with recyclable plastics that can take hundreds of years to break down. According to a 2015 RIRRC study, about half of plastics that end up in Rhode Island’s landfill are actually recyclable.

The challenge is no longer to get people to recycle; it’s getting people to put the right items in their recycling cart and nothing more. Over the past few years, recycling markets have become increasingly rigid about the level of contamination they will accept when buying materials from places like RIRRC. This means that RIRRC has to be extremely picky about what they allow in their recycling facility. Furthermore, not only are certain items simply not recyclable or are no longer accepted, some items – especially plastic bags and metal propane and fuel tanks – are extremely dangerous for the facility and the people who work there. Plastic bags get tangled and can cause major damage to machinery, and metal fuel tanks have caused explosions in the past.

Taking care of the trash

So what do the Environmental Inspectors – the people who sort through your recycling and who probably know more about your recycling habits than you do, think about Providence’s recycling problems?

“When in doubt, throw it out,” says Environmental Inspector Tom Dube, as it’s better to accidentally put something that can be recycled in your trash, rather than have bits of non-recyclable trash mess up your entire recycling cart. “Plastic bags are the number one problem. Bulky, big items are also an issue,” he says. “People will use their cart as a way to get rid of larger items and excess trash.”

To help address issues of contamination, the City is rolling out an overflow trash bag partnership with local stores in December and January. Overflow trash bags specifically for excess trash will be available from a number of stores in Providence, and these bags will be accepted alongside your regular trash and recycling carts on pickup days. Got extra garbage? Instead of dumping it in your recycling cart, you can use the overflow bags instead! Keep an eye out for more information and announcements regarding the overflow bag program on the City of Providence’s website. 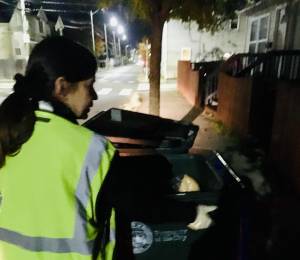 Despite the high prevalence of contaminated recycling found weekly by the City’s Environmental Inspectors, recycling is steadily improving. Providence’s recycling rate has more than doubled in a year from 8% in October 2017 to 16% in October 2018, and as Ramirez and Dube point out, they see positive changes week to week on their inspection routes. “People do take the warnings seriously and most of the time we don’t need to issue multiple warnings,” explains Dube. “Once we move on to a new neighborhood after a month, that’s when people start to slip back into bad habits.”

Of course, recycling is no silver bullet that will solve the very real and present plastic pollution problem, but luckily, communities, governments, and organizations across the planet are seeing the real and alarming effects of a plastic-based culture, both on our health and on the environment, and are stepping up to demand change. What can you do about plastic pollution in Providence, right now? Explore community-led groups like the Zero Waste Providence advocacy group, attend Environmental Sustainability Task Force meetings or meetings of the Task Force to Tackle Plastics, consider investing in reusable bags, bottles, and containers, and try and reduce your plastic consumption as much as possible. Most of all, make sure you are recycling right and talk to your friends and neighbors about what CAN and CANNOT go in their curbside recycling cart.

Still unsure about what can be recycled in Rhode Island? Here are the basic rules from Rhode Island Resource Recovery’s website.

That’s it-no other fiber products. For example, wood and textiles are made from natural fiber but they aren’t paper, cardboard, or cartons, so they don’t belong in your bin or cart. Paper and cardboard should be mostly clean and dry (a little grease on a pizza box is OK) and be flattened. Cartons must be empty at a minimum and rinsed whenever possible. Place plastic tops back on to cartons prior to recycling.

That’s it-no other metal. For example, a metal frying pan is not a can, lid, or foil, so it doesn’t belong in your bin or cart. Containers must be empty at a minimum and rinsed whenever possible. Foil should be clean and bunched up.

That’s it-no other glass. For example, a drinking glass is not a bottle or jar, so it doesn’t belong in your bin or cart. Containers must be empty at a minimum and rinsed whenever possible. Remove metal tops from glass bottles and jars first, and recycle separately.

That’s it-no other plastic. For example, a plastic coat hanger is not a container, so it doesn’t belong in your bin or cart. Containers must be empty at a minimum, and rinsed whenever possible. Place plastic tops back on to containers prior to recycling.
No foam containers, or plastic containers that once held flammable materials or oily chemicals like gasoline, motor oil, antifreeze, pesticides or herbicides.

No plastic bags, bags of bags, or recycling inside of bags! 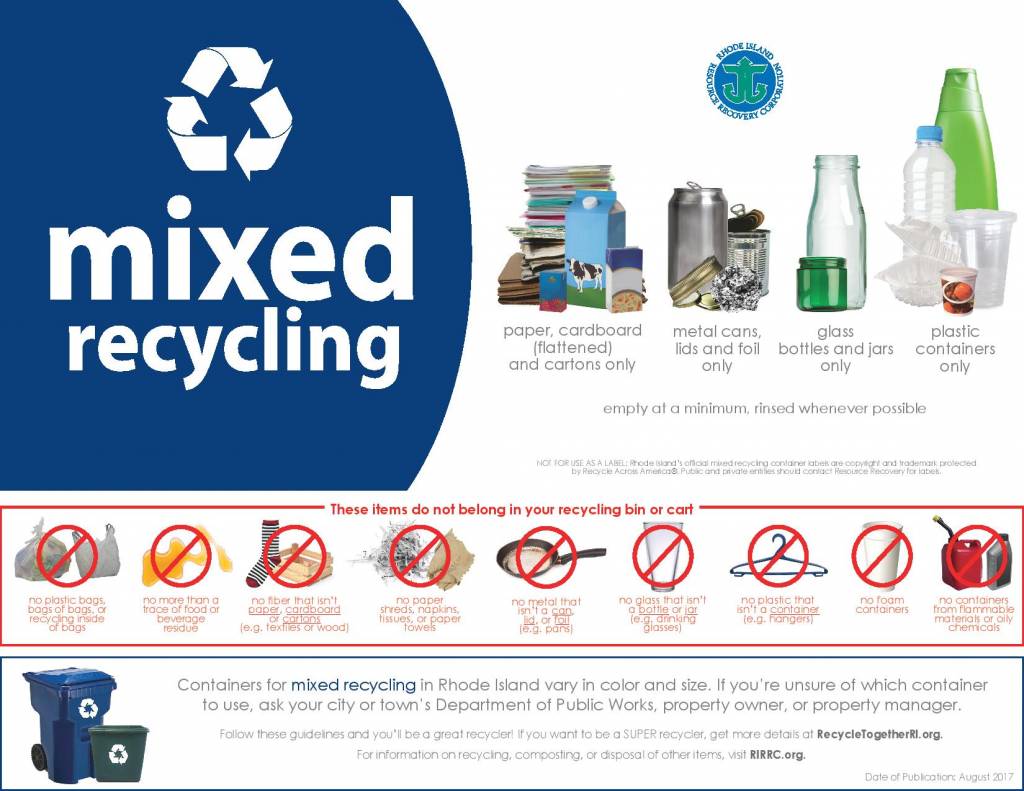