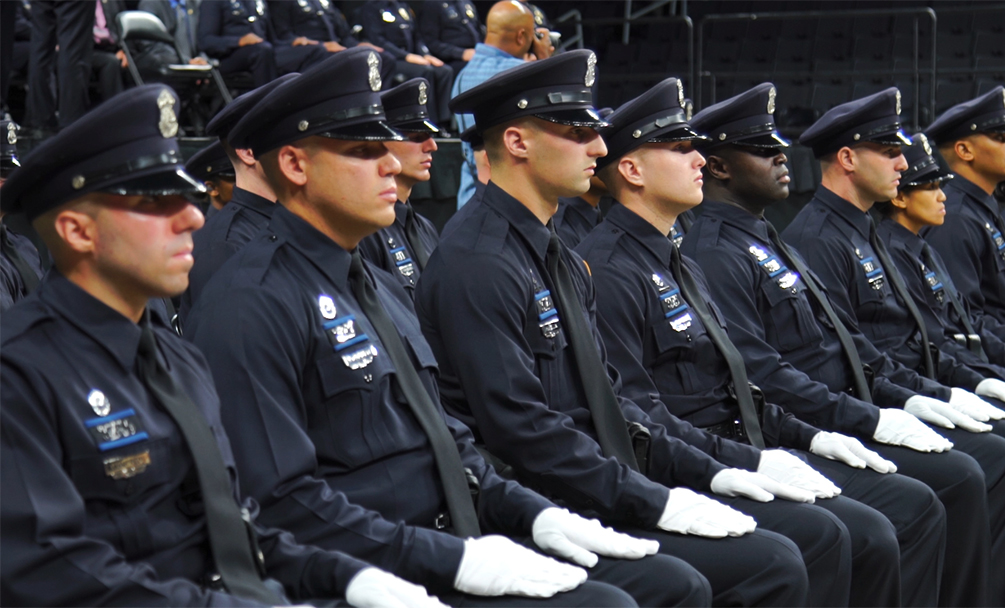 After an extensive selection process of over 2,200 applicants and the completion of 24-weeks of training, these 55 men and women represent the largest and most diverse class in the department’s 153-year history. 27 recruits are first-generation citizens of the United States, nine were born outside of the United States, 19 are bilingual and the class includes 38 minorities and 12 women.

As part of the vision that Mayor Elorza, Commissioner Paré and Colonel Clements developed at the onset of this process, the training academy staff, led by Director of Training Lieutenant Kevin M. Lanni, has had the distinction of accomplishing many firsts, including the development of a restructured curriculum to embrace the current needs of the community. To develop this progressive curriculum, training academy staff turned to community partners, developed a recruitment advisory board, and utilized various outreach efforts and resources, with the goal of enhancing the department’s legitimacy, transparency and trust within the community. The 68th recruit class has undergone a total of 812 hours of instruction with enhanced training in: implicit and explicit bias awareness, cross-cultural policing, LGBTQ competency, crisis response training, interactions with the mentally ill and homeless populations, increased ethics training and emotional survival in law enforcement. These new officers have also undergone Taser training and are the first officers trained in body-worn cameras in Rhode Island.

“Today marks an important occasion as we congratulate the 68th Providence Police Department Academy on the completion of their training,” said Mayor Jorge O. Elorza. “As the most diverse class in our department’s history, this cohort has the opportunity to strengthen the community-police relations that have benefited our city. We thank our newest officers for their commitment to ensuring the safety of the people of Providence.”

“This is a remarkably proud day for this department and the City of Providence,” said Colonel Clements. After six months of rigorous training, which is a taxing on both you and your families, you have certainly earned your way onto one of the finest police departments in the nation. Each and every one of you should be proud to be part of the most diversified police academy within the long and fascinating history of the Providence Police Department.”

Awards were also given out for Marksmanship, Physical Fitness, Academics, and for Highest Overall Training Achievement.