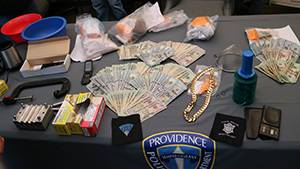 Providence, RI: Throughout the past several months, the Providence Police Department’s Intelligence and Organized Crime Bureau, along with the Massachusetts State Police Bristol County Narcotics Unit, conducted an investigation into a large-scale heroin and fentanyl trafficking operation that has resulted in the arrest of eight individuals. This major drug operation consisted of the distribution of heroin and fentanyl throughout Providence and surrounding communities and into Fall River and New Bedford, Massachusetts.

Through their investigation, police obtained search warrants for five locations, three in Providence (31 Grape Street, 142/144 Donelson Street and 27/29 Lisbon Street), one in Central Falls, and one in Pawtucket.  Approximately two Kilograms of fentanyl and heroin were seized, which holds a street value of $300,000.00.  Additionally, police also seized six vehicles, $60,000.00 in U.S. Currency and gold, packaging material and drug presses.   Eight individuals were arrested in Rhode Island, two in Providence and six in Pawtucket.  All eight individuals were charged with possession with intent to deliver one ounce to one kilogram of fentanyl, possession with intent to deliver fentanyl and conspiracy.

“This was a major drug trafficking operation that was using Interstate 195 as the main source to funnel drugs from Providence to Fall River and New Bedford,” said Colonel Clements. “I commend Sergeant Ludovici and his team, as well as our law enforcement partners, who worked tirelessly to ensure that these potentially lethal narcotics and criminals were taken off the streets.  With the heroin and fentanyl epidemic continuing to be on the rise, the dismantling of drug trafficking organizations such as this one is crucial.”

Under the Command of Major David Lapatin, the Intelligence and Organized Crime Bureau is overseen by Sergeant Nicholas Ludovici.  Surrounding agencies who were instrumental in the success of this investigation were the Massachusetts State Police Bristol County Narcotics Unit, the Providence Police Narcotics Bureau and the Pawtucket and Central Falls Police Departments.