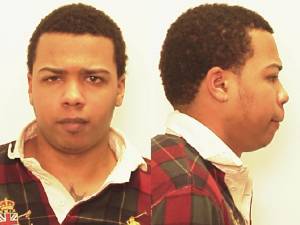 Providence, RI:  On January 18th at approximately 2138 hours, Providence Police Task Force Investigators Robert Foley and Brian Murphy were patrolling the area of Ledge Street when they came into contact with two subjects, including an individual known to police as Rashad Pitts. As police drove past the subjects, Pitts quickly clenched a weighted object in his waistband and separated himself from the other male subject. Police then proceeded to exit their cruiser and approached the subjects, who immediately fled on foot in opposite directions. The other subject involved was quickly detained by Investigator Foley who determined that the subject was not in possession of a firearm. Investigator Murphy continued to pursue Pitts on foot as he turned into an alley alongside 7 Ledge Street and observed Pitts to make a throwing motion with his arm. Police then located Pitts in the rear yard of 7 Ledge Street and he was immediately taken into police custody without incident.

Following the apprehension, Investigator Murphy returned to the area where the firearm was believed to have been thrown and recovered a Colt, 25 Caliber Pistol with one live round in the chamber and one live round in the magazine. Pitts was then transported to the central station where he confessed to Providence Police Detective, Doug Allin that he was in possession of the firearm, which police determined to be stolen.