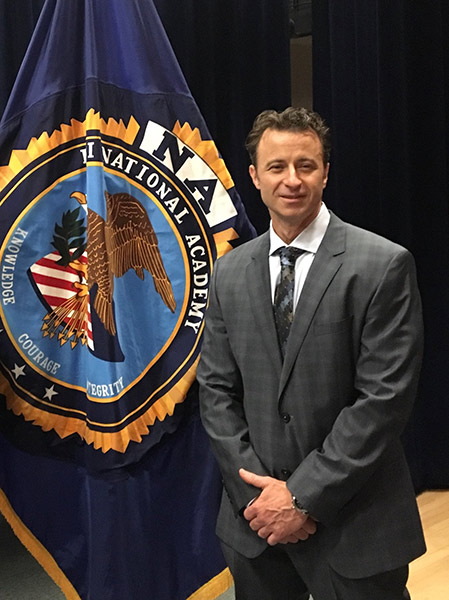 Providence, RI – Providence Police Captain Kevin M. Lanni was one of two hundred and twenty-two law enforcement officials to graduate from the 270th session of the prestigious FBI National Academy on December 15th, after completing the 11-week program held in Quantico, Virginia. The 270th session of the National Academy consisted of men and women from 49 states, as well as the District of Columbia, and 20 international countries.

The elite officers who are selected to attend the FBINA are highly respected within their agencies, with a record of meritorious police work and exemplary leadership skills throughout their careers.  Officers received advanced training in communication, terrorism, behavioral and forensic sciences and physical fitness.  Upon graduation, officers who complete the FBINA are better prepared to meet the challenges facing law enforcement within their communities. Training is provided by FBI Academy instructional staff, special agents and other staff members holding advanced degrees, many whom are recognized internationally in their fields of expertise.

Captain Lanni has been a member of the Providence Police Department since 1997. He is a highly decorated officer who has received numerous awards and commendations throughout his career.  In 2005 he was promoted to the rank of Sergeant and in 2012 he was promoted to the rank of Lieutenant. Captain Lanni has served in the Community Police Bureau, the Special Services Division, the Narcotics and Organized Crime Bureau, and the Mounted Command.  Prior to his departure for the National Academy, he served as Director of Training and oversaw the Providence Police Department Training Academy’s largest and most diverse graduating class in the department’s history. On November 22, 2017 he was promoted to the rank of Captain and will serve in the Patrol Bureau within the Uniform Division.

In 2016, Deputy Chief Thomas A. Verdi graduated from the 266th FBI National Academy and was elected by his peers as a class spokesperson for his graduating class.