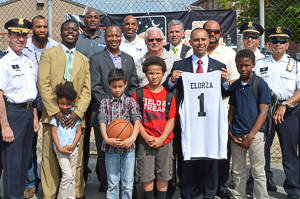 “I am thrilled to announce that Midnight Basketball is back in the City of Providence,” said Mayor Elorza. “This is an example of how we, as a community, can encourage healthy interaction and take advantage of the camaraderie that athletic competition creates. I thank all the community partners who made this program possible and encourage young adults throughout the city to contact the Department of Recreation, join a team, and bring your A-game.”

The Midnight Basketball League will consist of 24 teams, meeting in four locations throughout the City. Games will be played every Tuesday and Thursday evenings from 9PM-midnight at courts at Bucklin Park, Davis Park, Gano Park and Davey Lopes Recreation Center.